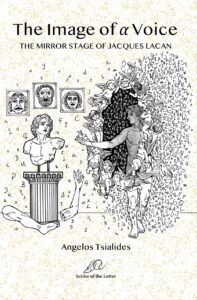 The School of the Freudian Letter is delighted to present a newly published book by psychoanalyst Angelos Tsialides – The Image of a Voice: The Mirror Stage of Jacques Lacan.

It has been since forever that man as a speaking subject has used metaphors to describe the world. Jacques Lacan is the first to bring this fact into a psychoanalytic context, noting that this very metaphorization draws reference from another metaphor that is primordial, where the individual takes his mirror image as a representation of his being.

Man is granted access to his body through his mirror reflection that he mistakes as his own self, which means that the speaking being defines themselves by what characterises that image. The mirror stage is about the constitution of oneself that takes place through the process where the subject attempts to identify with the locus from which the image receives its description.

The book illustrates the mirror stage of Jacques Lacan not only in the metaphorical sense of the word, but also literally: Plurality of illustrations supports the text that is full of examples from everyday life, popular stories, mythology and psychoanalytic cases. The Image of a Voice addresses not only the audience that desires to be introduced to the field of Lacanian psychoanalysis, but also those whose desire has led them to the path of psychoanalytic formation, whether practicing analysts or not.

A. Tsialides is a psychoanalyst and president of School of the Freudian Letter. He has given seminars in UK, Cyprus and Serbia and practices psychoanalysis in Limassol.